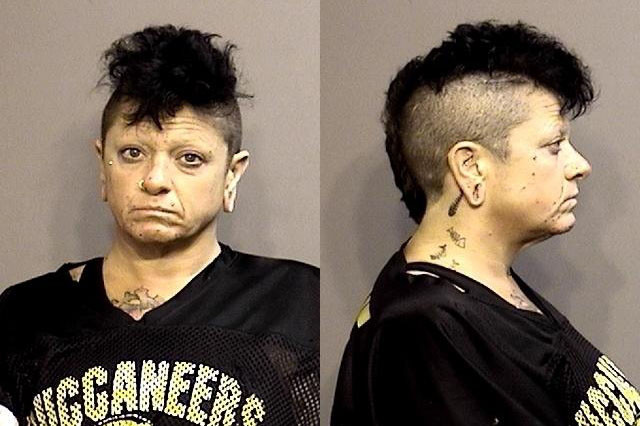 Amy Nicole Parrino, 43, was busted on charges of domestic assault and sexual abuse for the Sunday night incident that occurred at Parrino and the man’s Boone County home, according to a probable cause affidavit obtained by The Smoking Gun.

During the 9:45 p.m. attack, Parrino allegedly punched the man up to 25 times and struck him with a belt, cell phone and brass plate, according to the court filing.

Then, a naked Parrino chased the man around the house as he pleaded that she “leave him alone.”

But Parrino did not relent, as she “pushed him to the ground and then sat on his face,” the victim told police, according to the affidavit.

The victim told investigators that while Parrino “was sitting on his face she said to him ‘eat my p—-y,” the court document states.

For a “few seconds” during the encounter, the man said he could not breathe and that he was “scared to death,” according to the affidavit.

The victim later told police that the whole incident made him “sick” to his stomach and that he did not want to do anything sexual with Parrino.

As a result of the incident, the man suffered an up to four-inch-long cut on both his right arm and his left arm. He also suffered a cut on the bridge of his nose, which the man told authorities “was from when Parrino sat on his face.

Let this be a lesson to all you guys out there that refuse to eat pussy; you don’t go down, you might get fucked up.  My guy just refused to nibble a little clit, and ended up getting a brass plate cracked over his skull because apparently people just have brass plates lying around their homes? The visual of this lady beating the shit out of the guy, sitting on his face and screaming “eat my pussy!” is so fucking hilarious and also vomit inducing because this woman looks like she just got off a 174 hour shift in her tractor trailer.  The dude was about to be suffocated by a yeast infection.  Imagine dying via suffocation by Grimace’s pussy…yiiikes.

Thanksgiving is the WORST

Aliens…real or fake? Good or bad? My thots.