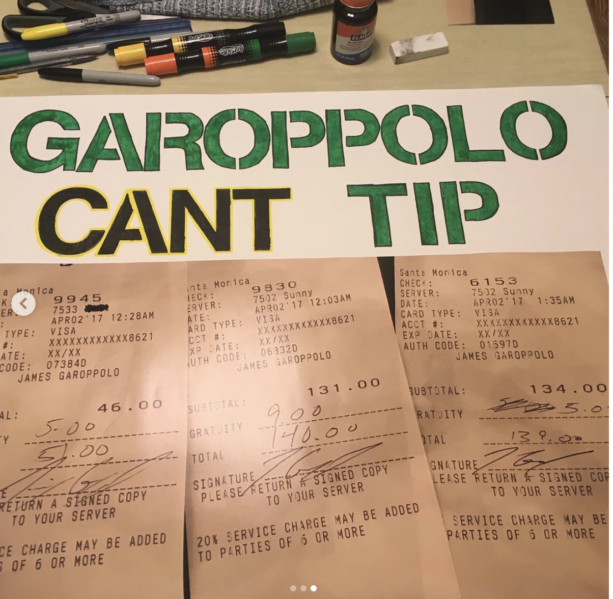 Even with a $137.5 million payday, it appears Jimmy Garoppolo doesn’t like to spread the wealth.

Bitter about the quarterback’s tipping habits, waitress Sunny Reichert, who has previously tended to Garoppolo, printed out the receipts and posted them on a sign, which she brought to Lambeau Field on Oct. 15, when Green Bay topped San Francisco, 33-30.

Never doubt the New England Patriots.  People were shocked when they traded Jimmy G, who was expected to take over Tom Brady’s throne & be the next big thing.  They doubted the team.  They said the Patriots were stupid to give away the heir apparent for so little.  Well, watch as we laugh in the faces of those people.  The fact that Garoppolo is out here tipping 5% is clearly the most obvious sign that he is not championship material.  My guy has 137.5 million M’s, and he’s tipping $5 on a $134 bill.  I’ll tip $20 even if the bill is like $35.  Sure, it’s not because I’m a nice person; it’s because it’s good for my ego.  Nonetheless, I’m still a better person than Jimmy Garoppolo.

Next article Instamom shames son on his birthday…but was she wrong?